The History of the Cricket World Cup

The History of the Cricket World Cup was released last year to tie in with the ICC tournament which was hosted by England and Wales, from 30 May to 14 July 2019. The final was played at Lord’s and was won by England after a dramatic super over finish against New Zealand. Compiled by Peter Murray, who has published several books on the event over 40 years, this lavish coffee-table book has become a collector’s edition featuring images and details from every World Cup since 1975. 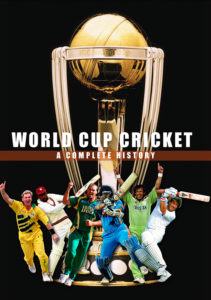