Sir Alastair Cook, who received a knighthood in the New Year Honours list – the first England cricketer to do so since Sir Ian Botham in 2007 – is the most prolific Test batsman the country has produced and one of the finest openers to grace the game. Cook turned 34 on Christmas Day 2018, having retired from international cricket in September. His career produced a phenomenal haul of 33 centuries and 12,472 runs in 161 Tests – all three landmarks are England records. The tall left-hander, famed for his remarkable powers of concentration, signed off with a century in his final match against India at The Oval but will continue to play for his beloved Essex until the end of the 2021 season. He is the first cricketing knight to receive the accolade while still an active professional. Cook, who showed precocious talent as a schoolboy before signing for Essex, was rushed into the England team aged 21 to answer an injury crisis, and demonstrated his ability and temperament immediately with a debut century in Nagpur, India. He opened for England in 159 consecutive Tests, the longest continuous run of any player, and was the youngest player of any nationality to reach the landmarks of 6,000, 7,000, 8,000, 9,000, 10,000, 11,000 and 12,000 runs in Test cricket. He stands fifth on the list of all-time Test run scorers, hitting 3,000 more runs than his nearest England rival, Graham Gooch, his good friend and mentor who happened to be one of his first coaches at Essex. After Cook announced his retirement, Gooch described him as “a genuine legend of English cricket “. The foreword is penned by Test Match Special’s Dan Norcross. 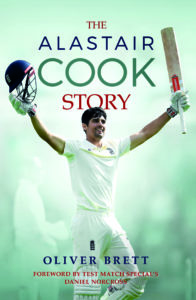